skip to main | skip to sidebar

Last year I had the idea that I wanted to make some new clothes for all the events leading up to Christmas. In addition to some wardrobe additions to me, I had several Christmas presents to sew for family, a pile of home-made presents to make, a bunch of shopping to do, some work to accomplish... and some adoption paperwork to fill out. SO- I got NO new clothes which was a bummer, but now that the new year is at least slowing down to a managable speed, I have been able to complete some bits and pieces.

First up is a peasant shirt from the July 09 Burda, it is style number 128 and isn't actually shown on a model in the magazine and is a take 1 make 4, so there's no line drawing either. I did read about Selfish Seamstress's version of this top and I should have been warned from that, but I wasn't. And I can't seem to find it on Patternreview.com or on the Selfish Seamstress's blog itself.

So to start with this shirt, here's the line drawing:

So let's get on to the problems with the pattern, shall we? First, the sleeves are drafted WAY TOO FREAKIN' BIG! I made them, then tried shirring the fabric with elastic thread in the bobbin. Then I tried zig zagging over the elastic thread and gathering, then I tried maxing out the stretch of the elastic while I attached it. No dice. The sleeves were still enormous around my wrists. Somewhere the Selfish Seamstress mentioned that she had the same problem, but since I'm built a little more *ahem* sturdily (or chunky) I thought I'd give it a shot as is. Nope, bad decision. I wound up taking about 8 inches out of the ends of the sleeves and I STILL had trouble getting it to gather up enough. My fabric flat out wouldn't gather into as small a circle as would have been necessary and I used light weight drapey fabric! WTF BWOF! Anyway, eventually I got it to a point that was good enough. Here's what that ended up looking like.

Now onto the shoulders. Generally I'm not very critical of the shoulder fit in any pattern because my shoulders are all sorts of wonky so I can't really expect anything to fit well in the shoulders without some major alterations. I do draw the line at sneaking a drop shouldered garment on me though- grrr. If only a model had been wearing this instead of a mannequin. I suppose with the photography I wouldn't have been able to tell much of a difference anyway, but there it is anyway. Drop shoulders annoy me because they constrict movement too much for my taste. Maybe in a sweatshirt or something really stretchy I could handle them, but not in a woven! This shirt is a real trick to get out of for me since I can't just grab the bottom and pull it up over my head because the drop shoulders tie me up about midway up. What a sight! Crazy seamstress trapped in her own project.

And here's a terrible picture of the shirt. Sorry for the phone photo, it was all I had at the moment. My mom thought it looked cute enough, but I don't think this will ever be a real favorite. That's a real shame though because the fabric is nice and the shirring on the bottom of the shirt is nice, but that's about all I can say about it.


Notice that you can't really tell the cuffs are jacked up. They were more comfortable pushed up a little and I liked that look a little better, so that's how they stayed all night.

So I guess the final verdict is that I will probably wear this shirt again. I didn't feel too Becky Home-Ecky when I was out in it and I really do love the fabric. If I were to make it again, I would not start with this pattern. In fact, I would probably just re-draft it myself from some other top or shirt that fits. We'll see how that goes if it ever comes about. Maybe in the spring.
Posted by Lauren at Thursday, January 28, 2010 1 comment:

Here was a fun project I completed over the summer. A friend of mine was taking her daughter to Disney World for the first time and wanted a princess dress for her to wear. She wanted it to be a cotton sun dress so she wouldn't get too hot, but she wanted it to be a Cinderella dress too.

I drafted the pattern myself (yay me!) by glancing at a BWOF bodice and taking B's measurements into account. I made a muslin and the fit was pretty much dead on which was both surprising and pleasing. I guess it's a bit of a cheat to have ton of ease taken up by elastic in the back, but for a first attempt it wasn't bad!

The dress was made from quilting cottons. The white is sparkly and the blue is just a plain satiny cotton from Joann's.


Actually, after looking at it, that's the inside back. The straps are folded into themselves before they were attached so they can easily be let out as she grows. And the back bodice was gathered to 30% of its length so that can be modified too in case she still wants to wear it when she gets a little bigger. It should fit for a long time. I used french seams to make the inside nice and self lined the front and back bodice.

Here's a closeup of the front:


I hand couched that line of faux pearls on. When I showed DH my handiwork and told him "I did it by hand!" he gave me an unenthusiastic "I can tell..." Oh well. And he wonders why he doesn't get more clothing made for him! Ha!
Posted by Lauren at Wednesday, January 13, 2010 No comments:

Back from the dead... mostly

I've been waffling back and forth on whether or not to resume blogging and I've decided to just go ahead and do it. There has been a fair amount of sewing going on in my extended absence, but a little too much life to manage to post anything of value. So I'm going to try to be better at posting frequently but I am making no promises of perpetually interesting content. I have found that I really love seeing what people are up to both when they do have the time and dedication to make really thorough posts and when they are only able to throw a quick photo and brief description of a project out there.

Here's a project that was amazingly completed roughly a year after the fabric was purchased. This skirt caught my eye from my first ever BWOF purchase and I bought this fabric shortly after thinking it would be a great fit. It just took me a year to actually get to it! The skirt is BWOF 09-2008-124 and the fabric is some fairly cheap faux suede from Joann's. The skirt had mixed reviews on Pattern Review, but I found it to be easy and I love the finished product. I think it is important to use a fabric that can be left raw at the hem.

Please pardon the lousy phone picture. Laziness took over last year and I was unable to muster the motivation to find and actually use the real camera for sewing endeavors, ha! But you can see that the skirt looks cute with a black top and black boots and tights. I've worn it several times. The only issue I have with it is the Marilyn Monroe moments that seem to be a little too frequent. All those big pleats make any gust of wind flip the skirt up. So matching undies are a must! Ha!
Posted by Lauren at Tuesday, January 12, 2010 No comments: 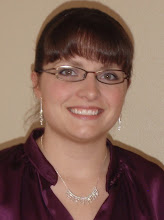 Lauren
Colorado
I am a twenty-something sewing enthusiast who tries to keep herself and her family in ever improving sewing projects. Sewing is my therapy, it keeps me happy, grounded and in stylish clothes.